The criteria for the inclusion of names on war memorials varied from community to community. Some war memorials only include the names of those who fought and died, others also include those who survived. Very few include civilian casualties. In Bedwyn, most of the inscriptions only commemorate the dead, and for this reason, these web pages will only commemorate those who died in the war.

More than 150 soldiers from the Bedwyn parishes died during the Great War. The exact total will never be known because numbers are derived from war memorials and local rolls of honour. The names associated with these memorials were compiled soon after the war.

Servicemen are usually associated with a parish. Their parish may have been a place of birth, a place of residence, or may have been associated with their parents. Consequently the identification of a serviceman within a particular parish has sometimes been quite arbitrary. Several men from Bedwyn are commemorated elsewhere in the country, and any local connections are obscured by the absence of their names on local memorials.

Other men, such as Private Choules of Grafton, appear to have been added to a local war memorial as an afterthought. The Grafton names are in alphabetical order, but his name appears at the end of the list. The name appears on a separate panel on the war memorial. A comprehensive record of servicemen who died during the war is held by the Commonwealth War Graves Commission, or CWGC. Their records are not infallible and from time to time a missing name is identified. The residence of a servicemen upon enlistment is recorded, but this information does not always identify the origins of an individual; it may simply record the place of work, or parents residence.

FURTHER INFORMATION
Visit the CWGC website, or explore the War Graves Agency records. There are large numbers of WWI websites and forums, of varying quality, but many providing an invaluable resource of knowledge. Census information and Soldiers Died in the Great War (SDGW) is available unfortunately through pay websites, although some may be free through the local libraries. County regimental museums, especially the Wardrobe at Salisbury, are also very helpful and informative. Many hold archives including online battalion war diaries.
For local information, visit the churches and war memorials of Bedwyn, or read 'Bedwyn Roll of Honour', by Jennifer Harrison, or 'Men of Grafton' by Michael Walsh.
﻿BEDWYN FATALITIES
In terms of fatal casualties, 1917 was the worst year of the war for the Bedwyn Parishes. Of the parishes, Burbage suffered the greatest loss, followed closely by Great Bedwyn and Grafton. In 1914, Little Bedwyn was the only parish not lose any of its menfolk. Perhaps surprisingly, four Bedwyn men came from overseas. Two men emigrated to Australia. One of them, Arthur Hyde, returned to Europe as an Australian soldier via Gallipoli, and died in France. The other man, Laurie Manderson, returned to England before the war and lived in Cadley. He died in service of the RAMC. Another two men came from Canada. Reginald Wilberforce-Bell, who was killed in 1916, was a business man and probably not a migrant. The other man, Ernest Pearce, died on Vimy ridge in 1917.

The efficient and impressive online records of the Great War soldiers in the former colonies suggest that we do not remember our own dead as well as perhaps we should. Although the work of the CWGC is remarkable, records of service men are scattered across numerous resources, many of which are neither online nor digital. It would be a worthy commemoration of our war dead to digitise and centralise all service records, and to make them available to the public free of charge. The easier it is to understand the cost of war, the more that contemplation and reflection may persuade future generations to step more wisely around potential conflict.
THE MISSING GENERATION
Some historians have referred to the Great War as a tragic event which wiped out a whole generation. A few modern historians have disputed this claim. However, across the country, men born between 1896 and 1900 were almost certainly caught up in the war as volunteers or conscripts. They bore the lion’s share of the fighting and of payment in blood. This was the case in Bedwyn, where most fatalities were men born between 1892 and 1898. I find it very difficult to agree with these modern historians.

The oldest man to lose his life was Brigadier General Tanner, who was born in Tidcombe. After an inspiring career in the colonial service, he retired before the war, only to volunteer the moment war was declared in August 1914. He died in 1917, the victim of debris from the explosion of an HE shell. In contrast, the youngest men, or rather boys, were 16 years of age, or younger. Maurice Scammell enlisted at 14 years of age, and is probably the youngest Bedwyn soldier. Frank Potter of Wokingham, born in Little Bedwyn, died at the age of 16.

REGULARS, VOLUNTEERS, AND CONSCRIPTS
Several of the Bedwyn men were already serving soldiers when the Great War began in the summer of 1914. A few men had completed their years of short service, and were on the Reserve list, and other men were Territorials. However the vast majority of men who enlisted in August 1914 were volunteers, and they became part of Kitchener’s New Army. The first of these volunteers saw service overseas in 1915.

One tragic aspect of the Great War was the frequent joint enlistment of pals. There are several examples of Bedwyn friends who enlisted together, and all too frequently died together. These men were volunteers, and they died as their units first saw action in 1915.
Increasingly after 1916, volunteering no longer proved attractive to a war weary nation, and conscription was introduced. It is probably not a coincidence that the number of fatalities in training increased during this period of conscription. Between 1916 and 1918, there were several such fatalities among Bedwyn men, probably due more to sickness rather than accident.

Most of the Bedwyn men served in the Army, and they chose the infantry as their preferred unit. Curiously none of those killed during the war appear to have served in either the cavalry, nor the Royal Tank Corps. However a few men opted for the Machine Gun corps, which was formed in October 1915.

The most popular choice of unit was overwhelmingly the Wiltshire regiment. Surprisingly, there was a large range of alternative infantry units, which were also chosen by Bedwyn men. The Royal Berkshire regiment was a favourite alternative to the Wiltshire regiment. In some cases, men actually chose their regiment, but in several of these cases, volunteers chose to be with their friends. Often, men were posted to another regiment, where recruitment for a preferred regiment was oversubscribed.

Several men volunteered for service with the Royal Flying Corps (RFC). One man, Major Rowden, saw service throughout the war only to die in a tragic accident in England in April 1918. He is the only RAF pilot from Bedwyn to be killed in the war. Another man, Captain Wasey, served the first three years of the war in the Royal Warwickshire regiment before transferring to the RFC in 1917. He died in the air, after a few weeks service as an observer. The third man was not an officer, indeed he was still a teenager. In 1918, a 19 year old Air Mechanic Gauntlett died of measles in Wiltshire, having just completed his basic training.

The Royal Navy attracted a number of men, and the story of their deaths reveal the heavy price that this service paid. During the first day of the battle of the Somme in 1916, some infantry battalions, approximately 1,000 men strong, suffered upto 70% casualties. In contrast, Frank Potter (1916) was one of 643 crew who died on board HMS Hampshire; only 12 men survived. Walter Vivash of Tidcombe died of illness, but one year after his death, his ship, HMS Queen Mary, was sunk at the battle of Jutland. There were 1266 crew on board, and only 18 men survived. When HMS Vanguard exploded at Scapa Flow, there were only two survivors out of a crew of over 800 men dead. A capital ship did not often sink during the war, but when they did it usually proved fatal for most of the crew.

THE GEOGRAPHY OF WAR

The servicemen of Bedwyn died in many places. It is often believed that most men died on the Western Front in Belgium and France, and that the battles of Somme 1916 and Ypres 1917 claimed most of their lives. Yet the picture presented by the records of the Bedwyn war dead is more complex and subtle. Men died in many other theatres of war too.

Some historians claim that the Great War was a global war, a world war. The distribution of the Bedwyn war dead suggests otherwise. The Great war was fought predominantly between European colonial powers. Bedwyn men died in Italy, Greece, and Gallipoli, on European soil, or as close to it in the case of Gallipoli. Other men, died in Egypt, India, or Mesopotamia, countries all under the British Imperial shadow.

The year 1915 has always been viewed as the worst in terms of casualties. However despite the heavy fighting on the Western front in 1915, fewer Bedwyn lives were claimed statistically month by month in 1915 than in the first 5 months of war in 1914. The war in Gallipoli caused a heavy toll on Bedwyn lives, and almost as many men died there than in France during 1915.

Cause of death is often difficult to establish, if not impossible. The death of many soldiers remain unrecorded. Even the cause of death of officers, whose details are usually recorded in battalion war diaries, is sometimes unknown. Sometimes the cause of death may be assumed, depending on the activity of a serviceman’s unit on his date of death, but such conclusions remain no more than guesswork.

Common causes of death include machine gun fire and artillery fire. There is at least one recorded incident of gas poisoning, and several of drowning. However, one of the most significant causes of death was sickness. In 1918, such cases might be attributed to influenza, or Spanish flu. But a number of men died in Mesopotamia and Greece from malaria, pneumonia, and other diseases.

The ratio of men directly killed in action or who died of wounds is difficult to define given that the deaths of many men were reported without any details. Sometimes it may be guessed that a man died of wounds simply because he is buried at a cemetery sufficiently distant from the front line to indicate he may have passed through a Field Ambulance or Casualty station.

In many cases, men have no known grave. This is normally because they were killed in battle and their bodies could not be recovered, for example if they were in no mans land or in enemy held trench systems. In some cases, there may have been no body to recover due to the effects of artillery fire, or due to battlefield conditions such as the mud of Passchendaele. In a small number of cases, men were buried and their graves marked, but subsequently the graves were destroyed in a later period of fighting, or "lost" after the war, when graves were moved from smaller cemeteries to larger ones. The CWGC has recently published details of concentration papers, indicating where soldiers were reburied after the Armistice. With some of these records, it is actually possible to establish where a soldier actually died, give or take a 100 metres. Such information can indicate if a soldier was killed at the height of battle, or before battle had barely begun. 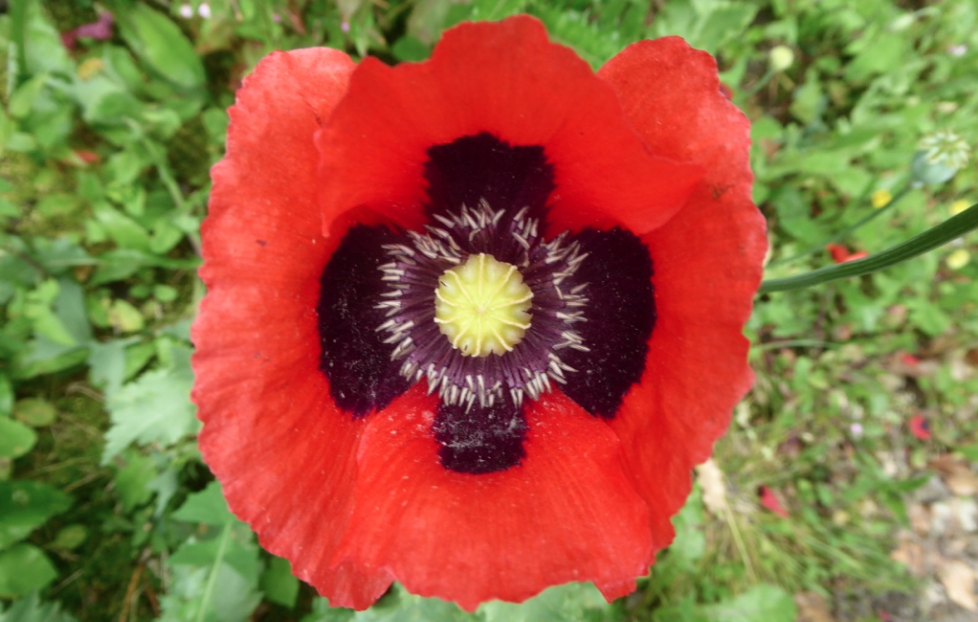 A Burbage Poppy, alleyway near the church.